Seeing the endangered pangolin is a rare honour. But, at Silvan Safari, we've had a couple of meetings with this magnificent creature....

Few people get the honour of seeing the endangered pangolin in real life. Most of our guests come on safari with their bucket list of incredible sightings and animals they’d like to see at Silvan Safari ready.

Some are easier than others, ranging from the elusive leopard, the gentle giant elephants or the magnificent male lion. However, there’s always one animal at the end of the list (for guests and guides alike), and that’s the very rarely seen endangered PANGOLIN.

The Quest to See the Endangered Pangolin 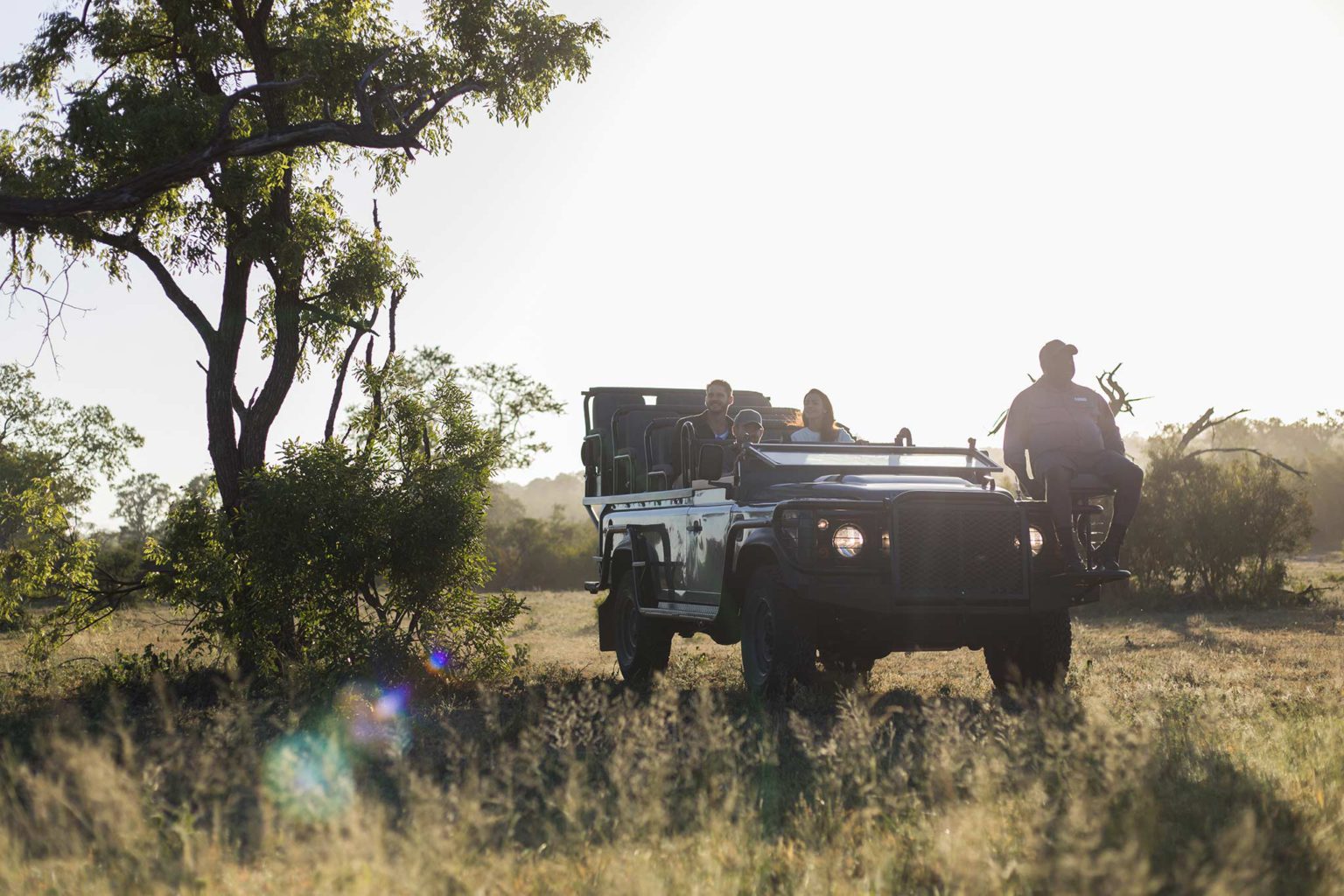 Every game drive at Silvan is filled with opportunities and possibilities.

When we as guides hear this specific request, we usually laugh and say: “Let’s see what we can do.” However, 99% of the time, we all know that it’s near impossible to find these fascinating creatures, regardless of how long and hard you look for them. But this time, luck was on our side.

​It was just another afternoon as we set out on safari like normal, another beautiful day out in the bush. The request to try and see a pangolin had been echoing around the vehicle for several days now. And it was followed by hopeful laughs and smiles every time someone mentioned the name. But there’s always that 1% chance that it could happen, so we don’t ever shut down this dream sighting request.

Our Lucky Day at Silvan Safari 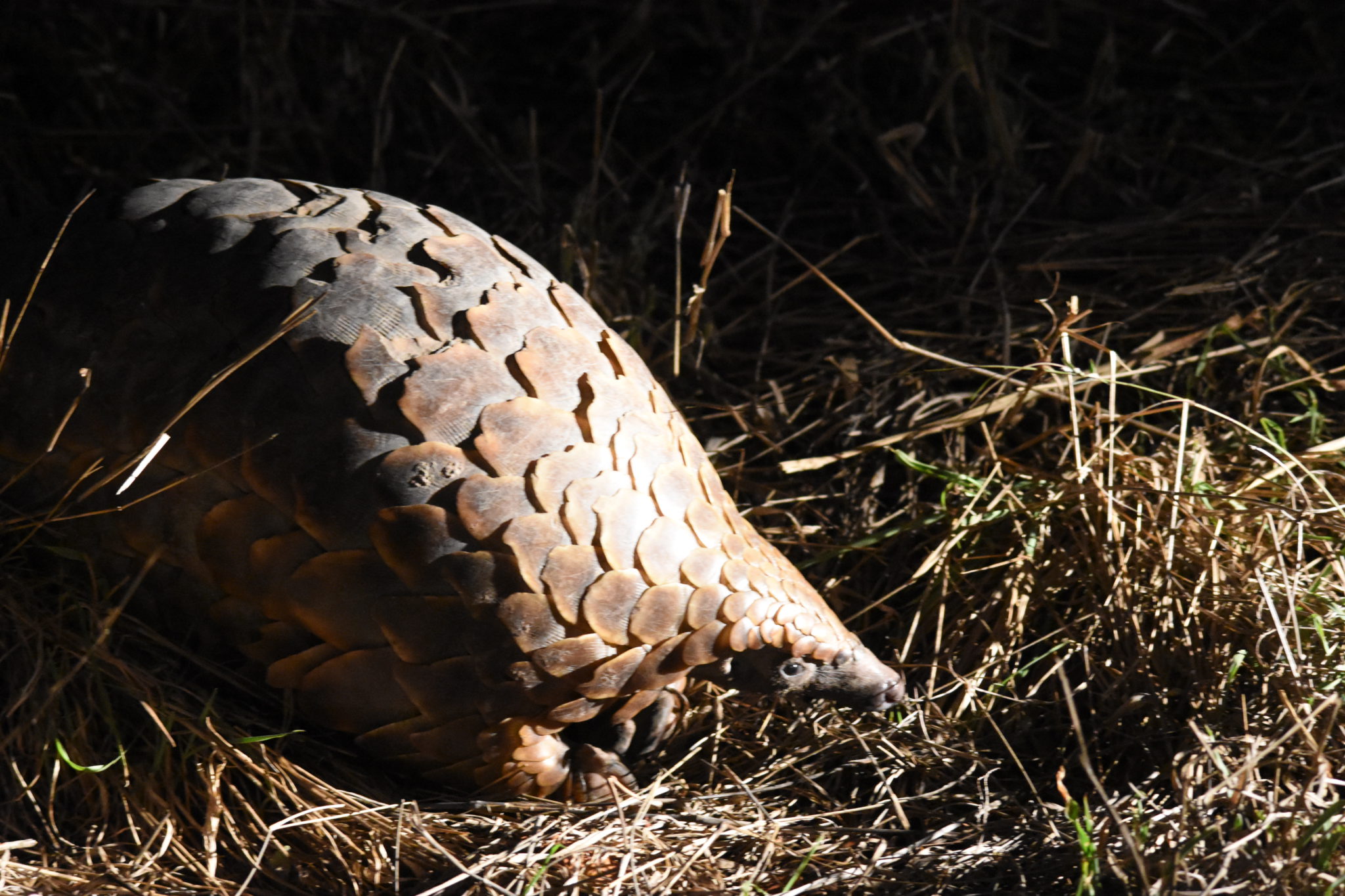 It was about 17h00, the darkness settling like a coat over the bush. We drove through a dip, looking left and right, and there it was…

Right there in the open, it was foraging away. No, not a leopard, lion, elephant or rhino, but the one thing no one expected to see – a pangolin. It was pure magic, and the radio went crazy, with most of the guides having to confirm and reassure themselves that what they heard was correct. 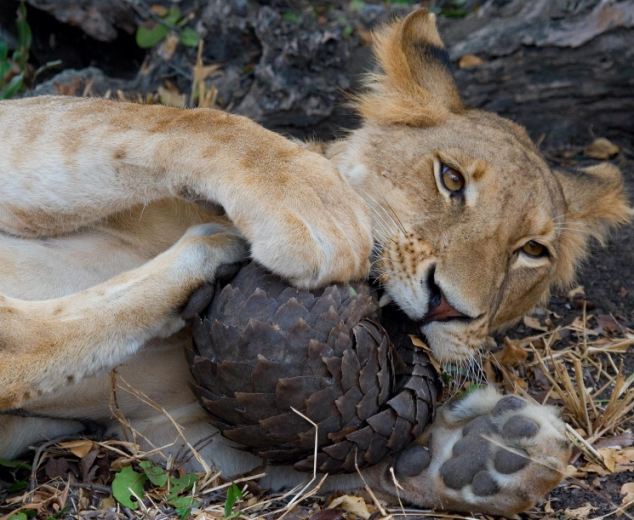 Despite the appearance of a threat, lions are more of an irritation to pangolins than a real danger. Image credit: Mark Sheridan-Johnson

While looking at this animal, it’s extremely sad to think that this shy, harmless, endangered pangolin is, unfortunately, becoming increasingly well known for one reason – being the world’s most trafficked animal in the world today.

Tens of thousands of pangolins are poached every year and killed for their scales used in traditional Chinese medicine and their meat, a delicacy among some ultra-wealthy in China and Vietnam. 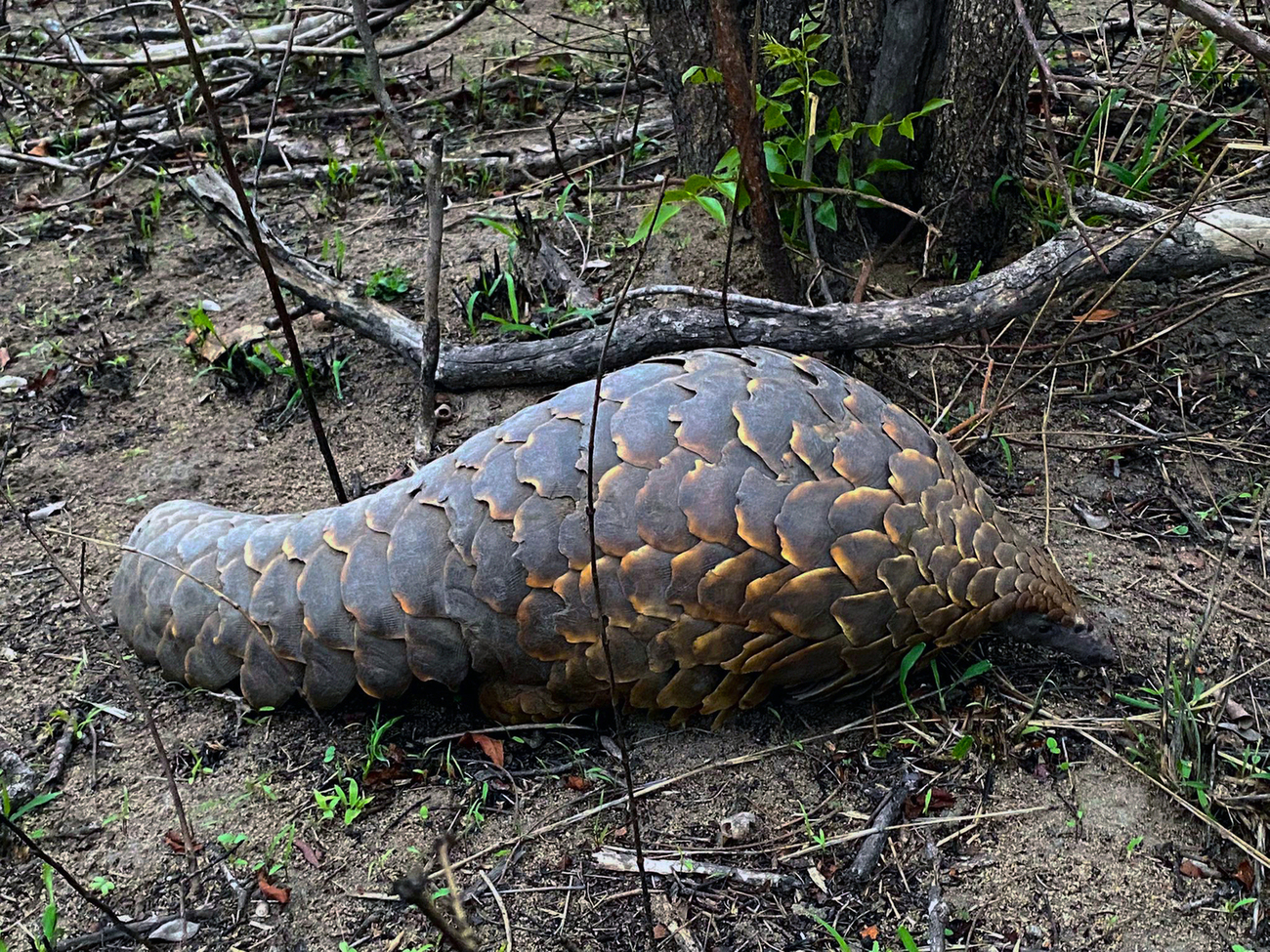 No sighting stirs excitement among trackers, rangers and guests quite like that of a pangolin.

Pangolins are solitary and primarily active at night, which makes this sighing extra special. Most live on the ground, but some, like the black-bellied pangolin, also climb trees.

They are generally the size of a house cat to more than a meter long. They are in scales made of keratin, the same material found in human’s fingernails.

When pangolins feel threatened or stressed, they curl up into a ball, like an armadillo. They can also release a stinky fluid from a gland located at the base of their tails, which acts as a defence mechanism. Luckily this particular one was very calm and relaxed, which made our sighting extra unique and memorable.

Daily Life of the Endangered Pangolin 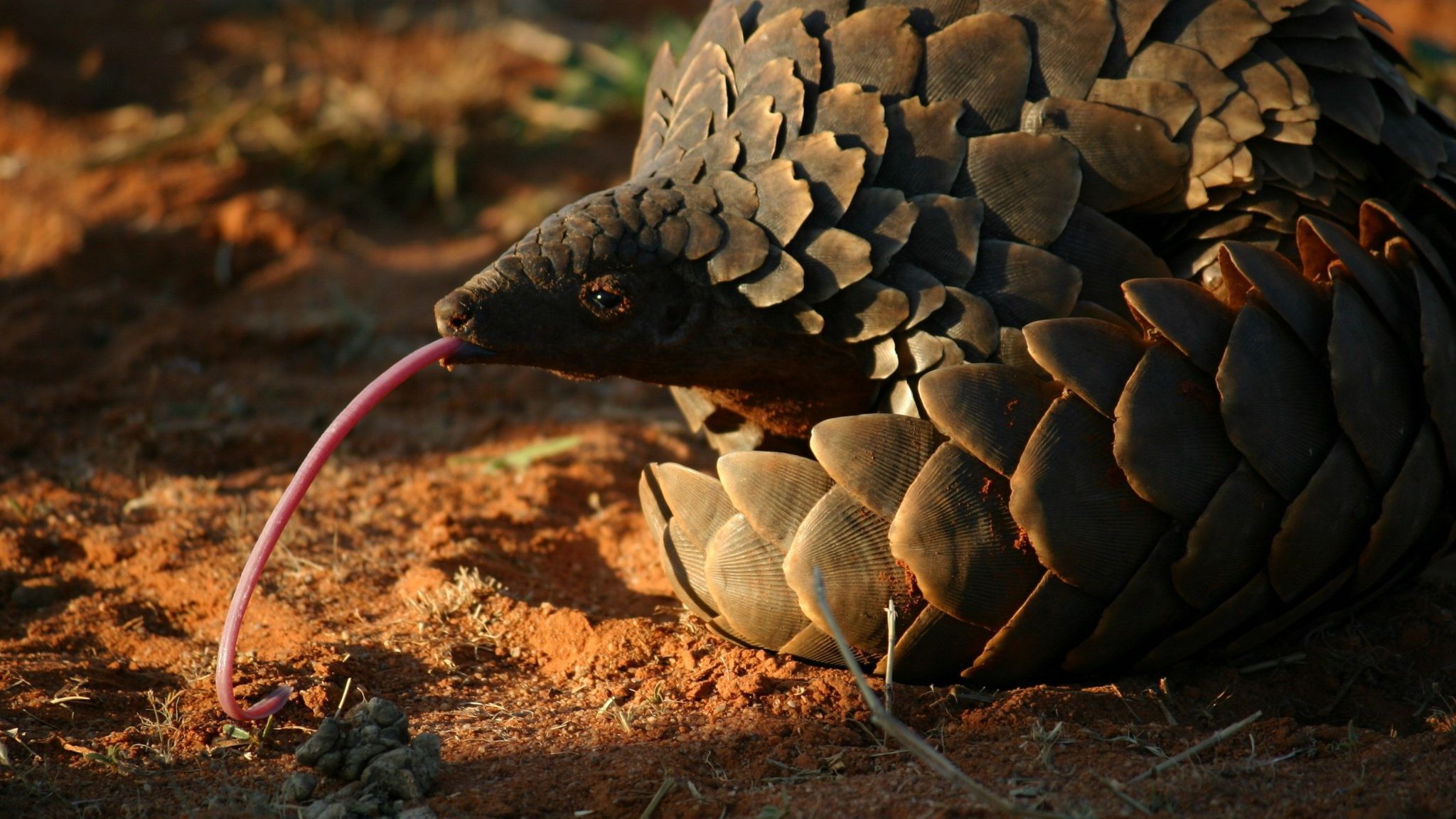 Like anteaters, pangolins have long snouts and even longer tongues, which they use to lap up ants and termites they excavate from mounds with their powerful front claws. Interestingly, they can close their ears and noses to keep pesky ants out while they’re feasting away!

Although they look and act like anteaters and armadillos, pangolins are more closely related to bears, cats, and dogs!

The only time pangolins spend time together is when they mate and bear young. Some pangolin fathers will stay in the den until the single offspring is independent. Babies, or pangopups, are born with soft scales that harden after two days, but they will ride on their mothers’ tails until they’re weaned at about three months.

A Fulfilling Day at Silvan Safari 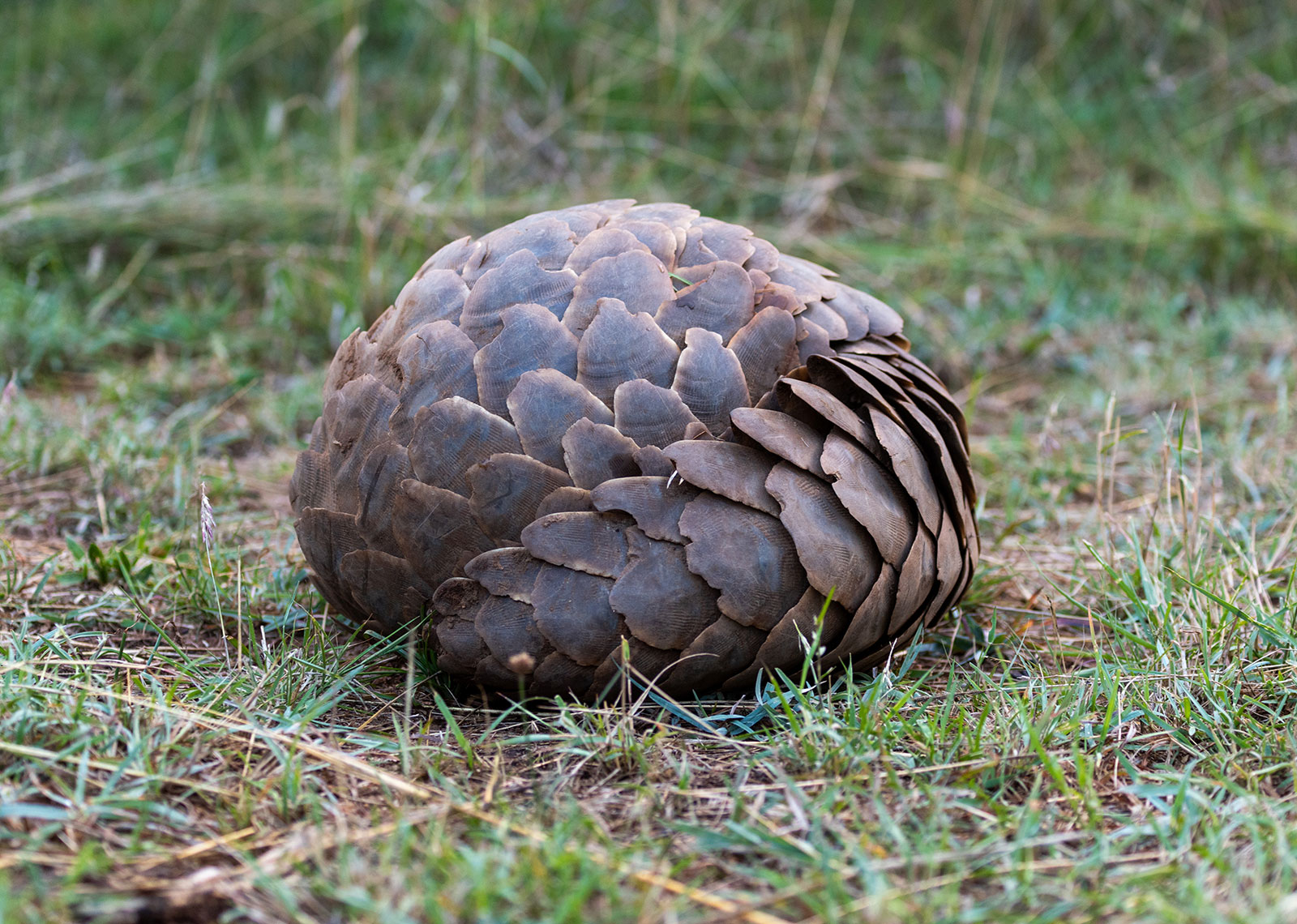 A pangolin curls into a ball when threatened, protected by its armour-like scales.

With our hearts overflowing with joy, the long wait was over to finally see the pangolin. It’s sad to think that these animals are so rare due to the extreme threat they suffer from humans.

Luckily, Sabi Sand Private Game Reserve and Silvan Safari is a safe haven for these incredible animals. Let’s hope they are here to stay and we can share the experience of seeing these shy, elusive and incredible creatures of the African bush with many more guests – like yourself!

Join Us for a Silvan Safari

The World’s Leading Luxury Lodge is waiting to be explored.